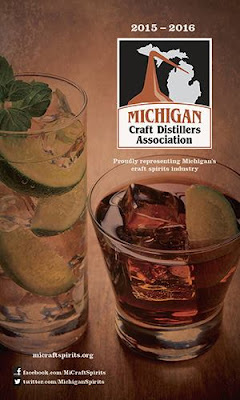 The Michigan Craft Distillers Association has published its first directory and map, identifying 16 craft distillery members and three distillery in planning members (32 unique locations) throughout the state. The publication is available free at member tasting rooms, Michigan Welcome Centers and at select chamber and visitor bureau offices. Twenty-thousand copies were printed and the four-color tri-fold piece is also available in PDF format and can be downloaded here.

Michigan’s first distilleries opened in the late 1800s, surviving the Prohibition years before essentially dissolving during the mid 20th Century. It’s only been in recent years that the industry has come back to life, with vim and vigor!

Currently, Michigan ranks 3rd nationally for the number of craft distilleries. With nearly 40 statewide, the potential impact of this rapidly-growing industry could contribute upwards of $400 million to the state’s economy.

The craft spirits industry supports countless other industries in Michigan as well. Many distilleries utilize locally-grown grains and fruits for their products, making them an important partner in the $102 billion agricultural industry. Public tasting rooms operating around the state make distilleries a part of the $22 billion Pure Michigan tourism industry – offering a quality, visitor experience while also providing a growing number of jobs.

Today, Michigan distilleries are actively producing award-winning brandy, vodka, rum, gin, whiskey and other unique spirits. You’re invited to sample them yourself, by visiting one of the tasting rooms identified in this directory. And, while you’re out and about traveling the Great Lakes State, be sure to request these locally-crafted spirits at restaurants, bars and retail outlets. It’s through your continued support that these producers are able to follow their passion in creating the finest distilled spirits for you to enjoy!

The Michigan Craft Distillers Association was formed in 2014 to organize the growing number of spirit producers in the state, to serve as a united voice on legislative, promotional and business levels. 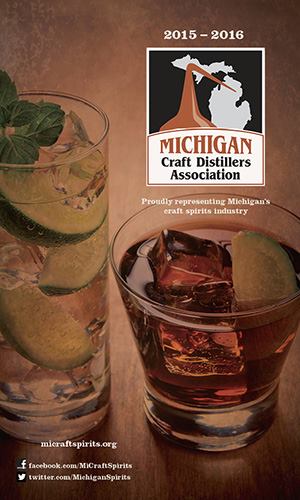 Posted by Dianna - Promote Michigan at 7:30 AM No comments:

The Michigan Craft Distillers Association thanks U.S. Senators Gary Peters (D-MI), Dan Sullivan (R-AK) and Kirsten Gillibrand (D-NY) for introducing bipartisan legislation this week that would reduce the federal excise tax from $13.50 to $2.70 per proof gallon on the first 100,000 gallons of production per year. This reduction would directly affect every Michigan Small Distiller, who is limited by the State to no more than 60,000 gallons of production.

“Although the number of small distillers in Michigan have increased over the past 10 years, our members have struggled to build profitable businesses in an industry that requires significant up-front investment in buildings, equipment and aging of their products before going to market,” says Don Coe of Black Star Farms, secretary of the Michigan Craft Distillers Association. “Federal excise taxes are a considerable component of our member's costs.”

The combination of federal and state taxes and markups make distilled spirits the most highly-taxed consumer products in this country. Michigan is an extreme example as distilled spirits are taxed and marked up at over six times the rate of wine and beer, and represent over 60 percent of the consumer retail price.

“Any relief that we receive in federal excise tax can be directly invested in the growth of our businesses with resulting job creation and purchases of goods and services or helping to make our products more competitive in the market place,” Coe says.

According to Senator Peters’ office, estimates show that the growing spirit industry could add up to $400 million to Michigan’s economy, and many Michigan distilleries utilize locally-grown grains and fruits for their products, tapping into the million-dollar agricultural industry as well. Across the country, the distilled spirits industry directly employs over 800,000 Americans directly and supports over 1.2 million jobs.

The Michigan Craft Distillers Association was formed in 2014 to organize the growing number of spirit producers in the state, to serve as a united voice on legislative, promotional and business levels. Michigan currently has the third highest number of craft distilleries in the country, with nearly 40 across the state, many of which opened in recent years.

With the upcoming summer travel season upon us, the Michigan Craft Distillers Association has set a membership deadline of March 1 in order to produce a full-color brochure / map to be made available to welcome centers, chambers, visitor bureaus and other public outlets by Memorial Day.

The printed piece will include a map identifying all member craft distilleries and tasting rooms, as well as listing other members such as festivals/events, retail outlets, hotels, and suppliers who support Michigan's spirits industry.

Membership definitions and rates are as followed:

MEMBERSHIP RATES (2014-2015)
The only voting members are Craft Distillery Members, with one vote per member.

Craft Distillery Members ($250 annually)
A distilling organization or brand that produces a distilled product at a facility in Michigan. The Michigan distillery must hold Federal Distilled Spirits Plant (DSP) and Michigan Small Distillers Licenses. And at least 51% of the products produced are fermented and distilled on the licensed premises. Those with more than one tasting room location can add them to the website and printed materials for an additional $100 per location.

Merchant Distiller Members ($250 annually)
Holds Federal Distilled Spirits Plant (DSP) and Michigan Small Distillers Licenses and acts as an independent rectifier, blender or bottler on the licensed premises. Those with more than one tasting room location can add them to the website and printed materials for an additional $100 per location.

Distillery in Planning Members ($150 annually)
A craft distillery in the process of establishing Distilled Spirits Plant (DSP) and Michigan Small Distillers Licenses, which adheres to all of the requirements as outlined for a Regular Membership. Limited to two years.

Associate Members ($500 annually)
Any suppliers of goods and services to the distilling industry. These can range from financial, legal, and design services, to equipment manufacturers and raw material vendors, as well as wholesalers/distributors.

Posted by Dianna - Promote Michigan at 10:04 AM No comments: 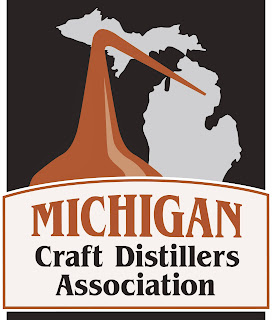 Michigan’s craft distilling industry is growing at a rapid pace – ranking #4 in the nation in terms of overall number of distilleries (behind California, Oregon and Washington). To help unify the interests of the more than two dozen Michigan distilleries, a statewide association has been formed.

The Michigan Craft Distillers Association is a non-profit organization charged with marketing the individual member businesses, their products and events, but also help bring a voice for the industry when it comes to legislative issues that affect the overall beverage industry.

Founding board members for the Michigan Craft Distillers Association are:

Dianna Stampfler of Promote Michigan will serve as the association’s part-time Executive Director.

“In 2012, I was approached by several of the Michigan distilleries to research and form an organization to represent the industry’s needs,” says Stampfler, who has also worked as the publicist for the Michigan Brewers Guild since 2008. “It’s been a time-consuming process and although no formal organization was in place, the distilleries have been communicating and working together to develop and enhance their industry.”

Earlier this spring, through its grass-roots connections, Michigan distillers were encouraged to contact their local State Representatives when a “Farm to Glass” bill was introduced that originally didn’t include distilled spirits. As a result, lines of communication between the distillers and legislators were opened. The association’s board and executive director have been asked to meet with other Michigan craft beverage producers in June to see where there are overlapping needs that the groups can work collectively to reach. The Michigan Economic Development Corporation has also reached out to the association for help in planning a business-to-business summit in November.

“Even though the association wasn’t officially formed, the board and many of our future members have been working on various levels to raise awareness for Michigan’s craft distilling industry,” Stampfler says. “Not only is there is regular communication among the distilleries, but our social media channels are full of news clips focused on this rapidly-expanding industry. We’ve been busy – and now, we can formally move forward as the state’s official organization.”

A directory and map identifying distillery locations is in the works, aimed to boost visits the individual tasting rooms and distilleries. The guide will also serve to encourage residents and visitors alike to seek out, ask for and sample the many Michigan-made craft spirits that are available in the marketplace. This publication will be distributed statewide at the Welcome Centers, chamber offices and visitor bureau offices, and will also be available online at SpiritsOfMichigan.com.

The Michigan Craft Distillers Association will offer membership to any operation actively distilling craft beverages in Michigan, as well as suppliers and retail establishments such as pubs, restaurants and beverage stores. An Enthusiast level membership will be offered in the future, allowing individual members of the general public to support the craft distilling industry.

Posted by Dianna - Promote Michigan at 9:59 AM No comments: 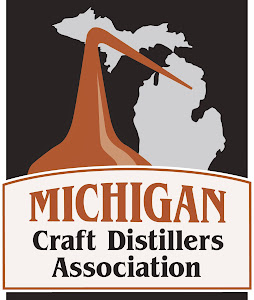